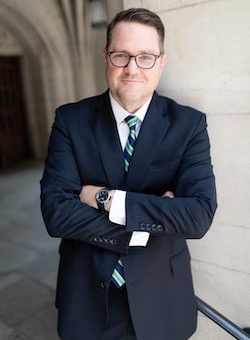 Lawyers seeking ethics counsel have hired Bob to represent them in court sanction proceedings, disciplinary investigations conducted by the Office of Chief Disciplinary Counsel, in grievance hearings before local grievance panels, and in hearings before the Statewide Grievance Committee.

The balance of Bob’s litigation practice focuses on individuals and businesses involved in commercial disputes. He handles everything from simple breach of contract matters to more complex cases involving disputes between and among business owners, partners, and LLC members. He has been involved in representing municipalities, law practices, medical practice groups, and business professionals. In addition, out-of-state law firms frequently hire Bob to serve as local counsel because of his experience and knowledge of local practice.

Bob was formerly a partner at a large Bridgeport law firm, serving as a co-chair of the firm’s litigation department. He is active in bar association activities, including the Connecticut Bar Association’s Federal Practice Section, where he serves as an officer and member of the Executive Committee. He also serves by appointment on the Federal Grievance Committee, a committee of lawyers appointed by the U.S. District Judges for the District of Connecticut to hear grievance complaints against lawyers admitted to practice in federal court.

Sample of Results in PracticeAbout Bob

Bob grew up in West Hartford, Connecticut and resides in Guilford with his wife and daughters. He loves the Boston Red Sox and tries to escape to Cape Cod with his family whenever possible.

Bob also maintains an AV® rating from Martindale-Hubbell®, indicating “very high” ethical standards and “very high to preeminent” legal ability. Martindale-Hubbell Peer Review Ratings attest to a lawyer's legal ability and professional ethics, and reflect the confidential opinions of members of the Bar and Judiciary. For more information on the rating system and process, click here.

In 2009, Bob received the Pat Hart Service Award in recognition of his efforts on behalf of the Music & Arts Center for Humanity, Inc., a non-profit school of the arts located in Bridgeport, Connecticut.

University of Connecticut School of Law
With Honors

Bob's cases have garnered public attention and have been covered in both the local and national media.

Contact Us
Practice Areas
Client Reviews
★★★★★
In 2016 I was wrongfully accused or very offenses I did not commit. After 3 years facing the matter with a public defender I hired attorney Bussert. From the start he was knowledgeable, responsive and aggressive in defending me in court. Before trial he successfully won arguments on what evidence could be presented and other constitutional matters. During trial attorney Bussert dismantled the complainants story via cross examination and effectively turned the prosecutions witnesses into our witnesses. I was facing a lengthy sentence on false charges but I was found not guilty now I can resume my life. I strongly recommend attorney Bussert and his team on any legal matter. Marc
★★★★★
Two years ago my son, a federal inmate, lost all his privileges for 6 years along with 6 months good time. We believe the severity of these sanctions was not deserved. We hired Todd Bussert who guided us through the lengthy process of appeals ultimately leading to filing a 2241 motion the end of July 2018. Two months later Mr. Bussert called to inform me that after reviewing the motion the government decided to drop the case and completely expunge it from my sons record. He got all his privileges back, along with the 6 months good time. This was the best possible outcome and exceeded our expectations. After 2 years I finally got to speak to my son and look forward to visiting him soon. This would not have been the case without the experience and expertise of Todd Bussert. Arlene
★★★★★
Todd was recommended to us by an attorney -- in itself a highly positive statement about Todd's qualifications. Todd helped us obtain a very successful outcome in a federal criminal case. He was very knowledgeable, very competent and responded quickly to questions. It was a true comfort having him on our side and I absolutely recommend him. John
★★★★★
I was fortunate enough to have Mr. Bussert as one of my defense attorneys when I went to trial. He never gave up no matter how may challenges we faced. He has an incredible ambitious passion for what he is hired to do. The team he had working with him was impeccable and resilant in achieving getting me home to my family. I am very grateful for having Mr. Bussert on my side when it was needed. Steve
View More
Submit a Law Firm Client Review